LCT(A)s AT NORMANDY ON D-DAY

LCT(A)s IN NORMANDY AT H-HOUR ON D-DAY

Here is a little bit of amphibious naval history that may have escaped notice. It concerns 26 LCT Mark 5s.

Sometime in late 1943, the planners of Overlord decided they needed more close in firepower. They may have been influenced by the British, especially General Montgomery.

As a result the U.S. Navy Gunfire Support Group was formed. The group consisted of LCGs, LCRs, and LCT(A)s. The LCGs and LCRs were converted British landing craft, respectively, fitted with various guns and rocket launchers. These did not beach; their mission was close in gunfire support. The LCT(A)s were US built LCTs, which were lend-leased to the British for the Mediterranean operations. They were "reverse lend-leased" to the US for Normandy

These LCTs were returned to the UK and sent to various British shipyards to be converted to LCT(A)s-the "A" for "Armored". A "2" was added to the original hull number-therefore my built in Manitowoc, WI, USS LCT124 became USS LCT(A) 2124. 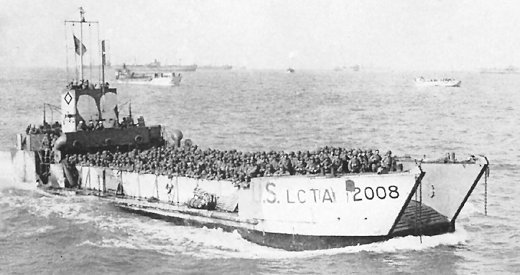 Armor was added so these LCT(A)s could go into the beach at H Hour with firepower from two tanks. A wooden ramp of heavy timbers was built so the two tanks side by side up forward could fire going into the beach. The ramp raised them high enough so they could fire over the bow ramp. A last minute problem developed when ramp extenders were added that in an extended position would prevent firing over the ramp. If retracted during the run to the beach, crewmembers (under fire) would need to flip them to the extended position upon landing. With Yankee ingenuity the 2124 had some wooden wedges made so that the bow ramp could be lowered sufficiently-yet secured-to allow the tanks to fire over the bow ramp extensions. A third tank was fitted with a bulldozer blade to knock down low masonry wall on the beach.

The three tanks plus the added armor made for very little freeboard while crossing the channel. We also carried the Army Engineers and the Navy Combat Demolition crew who were responsible for clearing a path through the obstacles on the beach. We towed their LCM across the channel and transferred them to it a few miles from the beach.

We also streamed some makeshift minesweeping gear-paravanes tethered to our stern with manila lines-to clear a mine free path for the landing crafts that would follow. We carried a radar reflector so that the gun-fire support ships could monitor the first wave's progress to the beach We also switched on a device that was supposed to jam the German fire control radar.

The tanks we carried were attached to Company A, 743rd Tank Battalion.

My belief that the Gunfire Support Group was a somewhat late addition To the Normandy invasion plan is supported by the fact that our small boat flotilla at Little Creek ATB, my original assignment, had practically completed its training when we were suddenly given a few days familiarization with LCTs and sent to the US Navy Base II in Scotland in January, 1944.

We waited in Scotland while our respective crafts were being refitted In the UK. My LCT(A) 2124 was converted in a shipyard on the Thames near London. We accepted the craft from the British on April 5, 1944. Neither my crew nor I had seen a LCT(A) before then. Other of the ~6 LCT(A)s were completed sooner and some later--some made it just in time for the invasion. I was fortunate that I could participate in both the dress rehearsals at Slapton Sands. I substituted for another craft that was not completed in the 1Tiger" rehearsal for Utah beach and took my assigned spot in "Fabius", the rehearsal for Omaha beach.

16 of the LCT(A)s were assigned to Omaha beach and eight to Utah beach.

While on the beach, a shore battery placed at least 10 shells of about 57mm caliber into the 2124. The most serious problem was punctured fuel wing tanks and loss of the anchor as a shell severed the anchor cable. We did retract but lost power about a mile from the beach because of saltwater in the fuel. Switching fuel tanks got us going again, and with a strong list to starboard, we spent the next week in unloading operations. A landing diagram for my sector of Omaha beach is attached.